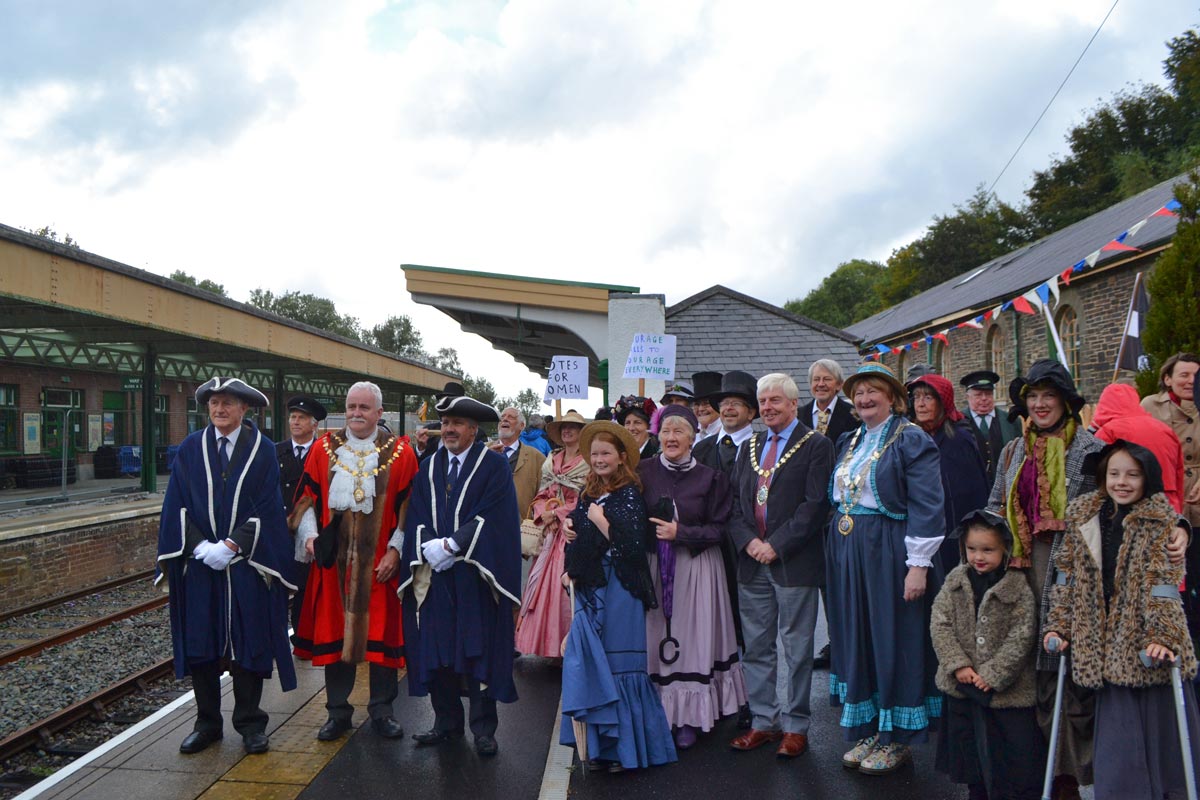 Despite the wet weather, Okehampton’s community turned out in force at the weekend to celebrate the 150th anniversary of the first public passenger train arriving at Okehampton station.

On Saturday, more than 150 people – many in period costume – enjoyed a Victorian Tea Party at the town’s Charter Hall. The event featured a humorous play recounting the House of Commons debate making the case for, and against, a railway to Okehampton.

The Hall was decorated with bunting made by children from the town’s two primary schools, coordinated by Dartmoor Multi Academy Trust, as well as a huge timeline of the history of Okehampton’s railway made by Okehampton girl guides.

GWR and Network Rail staff had a gazebo in Red Lion Yard and were talking to local people about the forthcoming reopening of the line.

Then on Sunday, the anniversary itself of the first public train, the Okehampton Excelsior Band created a fine atmosphere first in the Charter Hall and then at Okehampton station to accompany a recreation of the events of 1871. This included a proclamation about the coming of the railway and then, at the station, a ceremony where the Mayor presented the “Victorian Stationmaster” with a special key, symbolising the opening of the railway to Exeter.

The Mayor of the time was played by the current Mayor, Cllr Bob Tolley, and the Victorian Stationmaster by Clive Charlton of Bere Ferrers.

The town was decorated for the occasion, with the centrepiece being a “Triumphal Arch” banner across Fore Street, echoing the arches that welcomed the coming of the railway in Okehampton and many other Westcountry towns.  A number of shops and businesses displayed commemorative artwork designed by local children.

The Museum of Dartmoor Life, in Okehampton, contributed to the celebrations with an exhibition called ‘When the Train Came to Town’, including photographs from the last 150 years, collection pieces from the Museum, the Station Museum and private individuals, and also the voices of the last station master and the last steam engine driver. On Saturday, Wren music performed music of the era inside the museum.  The museum opened specially on the Sunday.

The celebrations were the brainchild of a committee chaired by Cllr Dr Michael Ireland, with the programme masterminded by Paul Vachon.

The Devon & Cornwall Rail Partnership helped with the planning and organised funding. Manager of the Partnership, Richard Burningham, said: “It’s been a really lovely weekend and no-one was going to let the rain dampen spirits, and it certainly didn’t.  I have been really impressed by how many local people have got involved and especially by everything done by pupils of Okehampton College, the primary schools and Okehampton girl guides.”

The modern-day Dartmoor Line, linking Okehampton, Crediton and Exeter, is scheduled to reopen by the end of this year. The reintroduction of regular year-round trains after a 49 year gap – the last regular passenger service ended on 3 June 1972 – is part of the Government’s “Restoring Your Railway” programme.