Okehampton station was opened on 3rd October 1871 by the Devon & Cornwall Railway Company.

In 1872, the D & CR was absorbed into the London & South Western Railway, thus providing through services from London Waterloo and Exeter to Okehampton.

By 1874, the line had been extended westwards to Lydford, where it joined with GWR’s branch line from Launceston to reach Plymouth.

In 1890, a new independent route was opened from Lydford to Devonport and Plymouth through Tavistock and the Tamar Valley. This became the new main line.

The Bude and North Cornwall branches from Okehampton left the Plymouth main line at Meldon Junction, just west of Meldon Viaduct, and were completed in stages in the 1890s.

At the Railway “Grouping” in 1923, the L & SWR became part of the Southern Railway. In 1926, the Southern Railway introduced the famous Atlantic Coast Express from London Waterloo to the holiday resorts on the north Devon and Cornwall coasts, calling at Okehampton at around 3 30PM daily.

Between 1930 and 1932, the station was rebuilt. The large main station building dates from this time. The signal box dates from 1935. 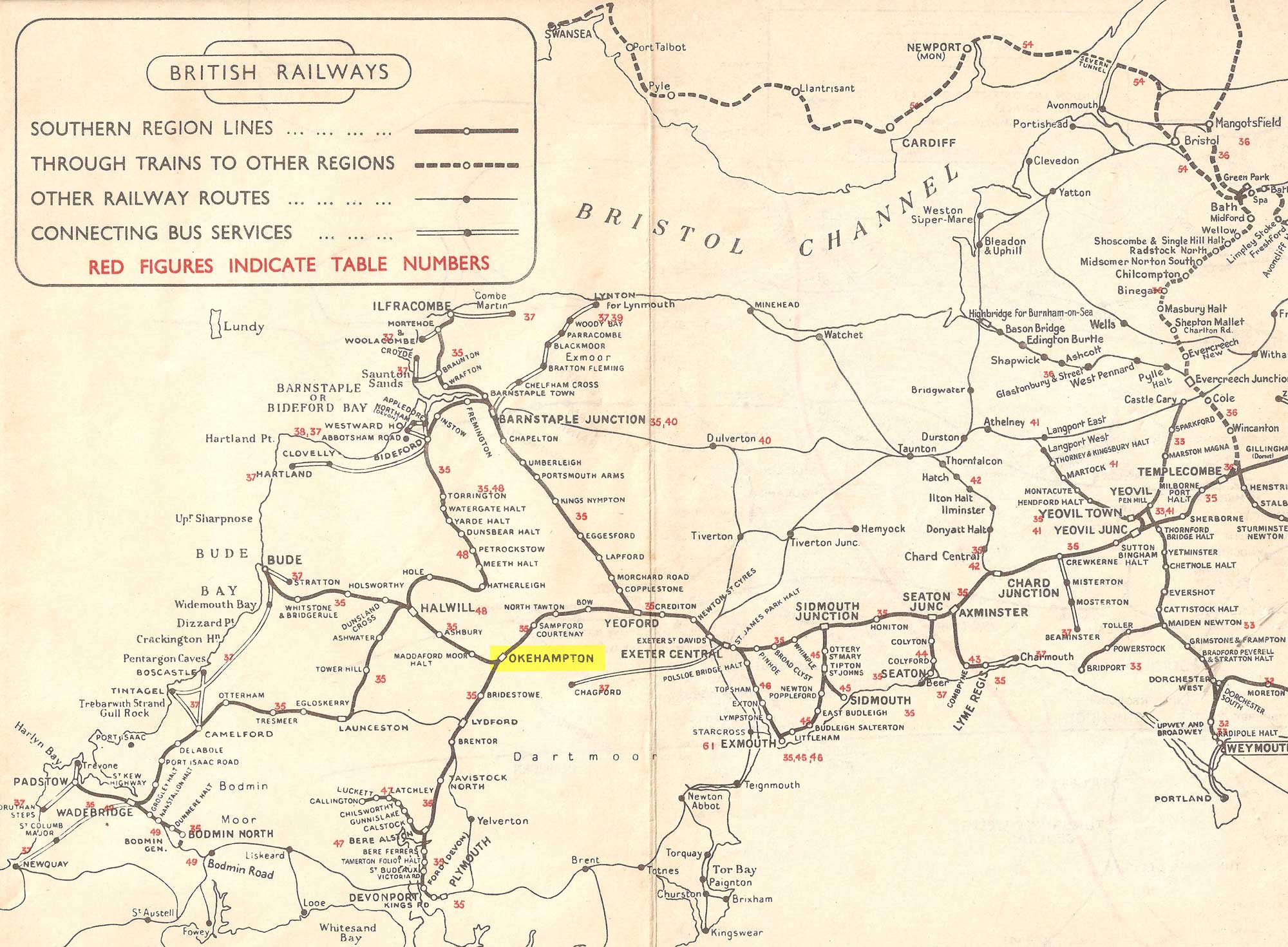 At the peak of services through Okehampton in the 1950s, there were 12 or more daily trains in each direction and on Summer Saturdays, this could increase in with duplicate Atlantic Coast Express services. Also in the early 1960s, a car transporter train ran between Surbiton and Okehampton on Summer Saturdays, bringing holidaymakers and their cars from the London area. 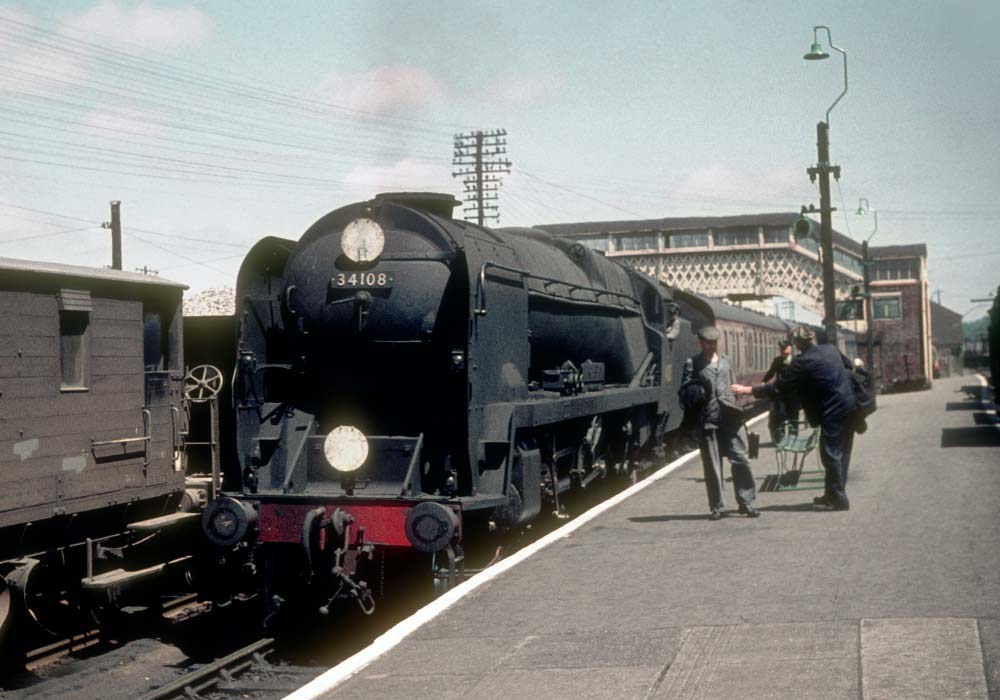 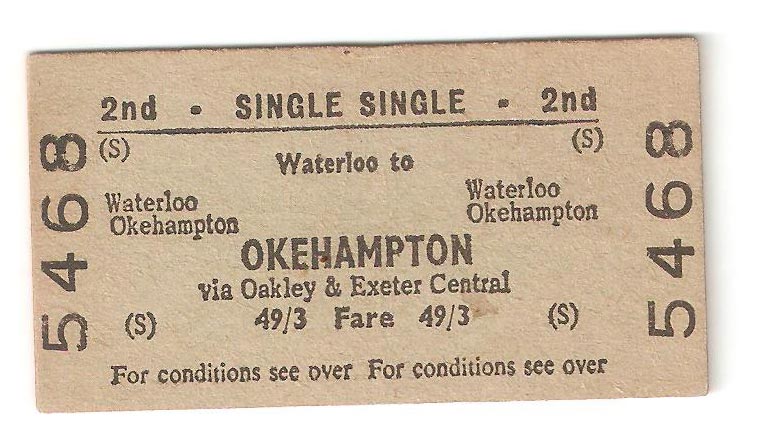 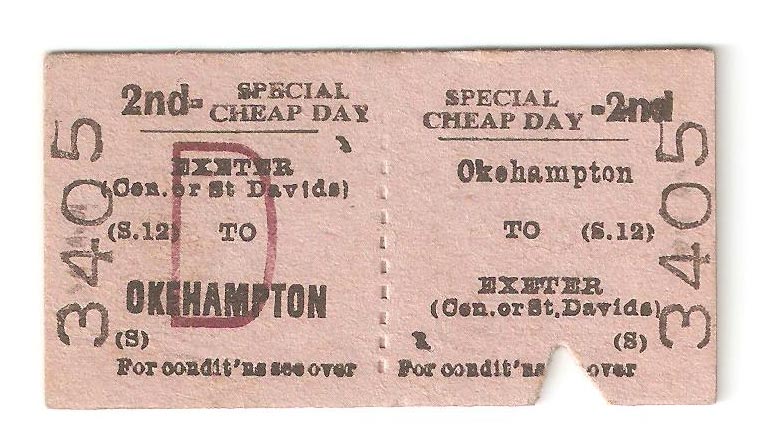 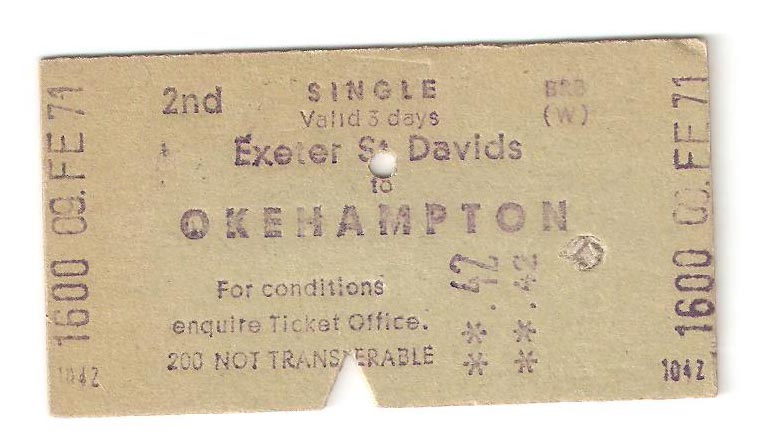 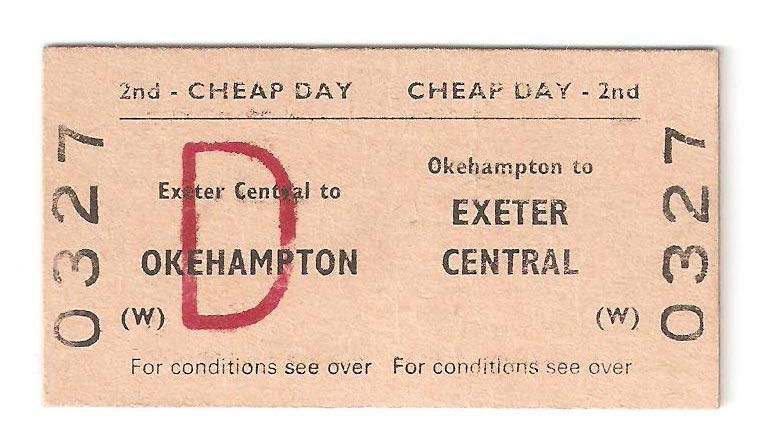 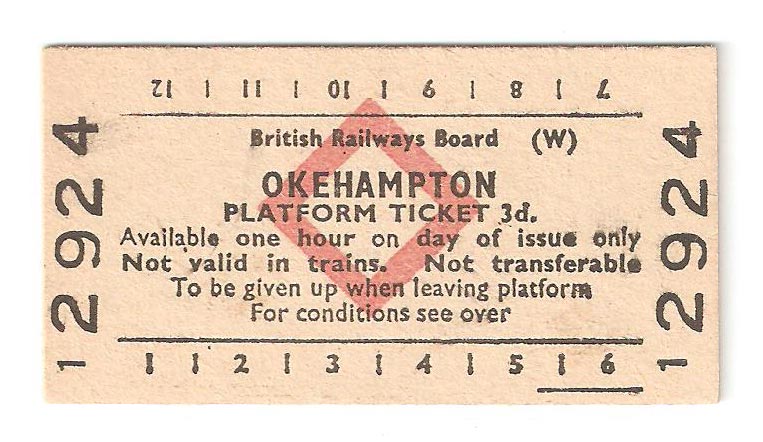 Everything changed with the publication of the “Reshaping of British Railways” report in March 1963, just three months after the final transfer to the Western Region. Known better as the “Beeching Report”, after its author, British Railways Chairman Dr Richard Beeching, it called for the closure of pretty much the entire network in west Devon and north east Cornwall.

The Atlantic Coast Express ran for the last time in 1964, the North Cornwall Line and the line to Bude closed in 1966 and the line to Lydford, Tavistock and Bere Alston closed on 6th May 1968.

The Beeching Report envisaged Okehampton itself staying open, served by local trains to and from Exeter calling only at Crediton.
Unfortunately this didn’t happen and the final train left Okehampton on Saturday 3rd June 1972 - pictured. 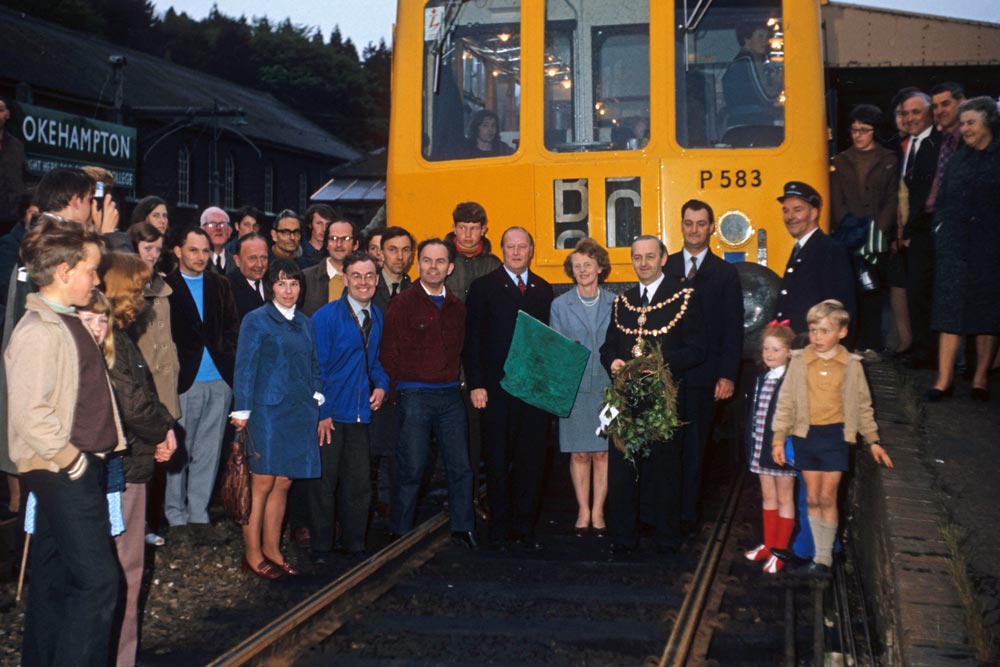 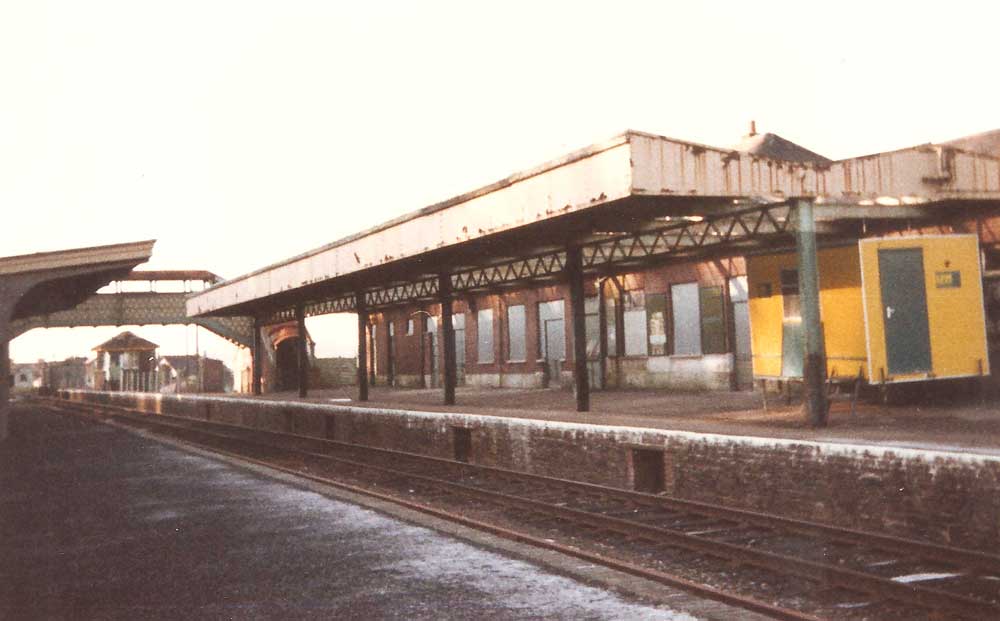 Fortunately the Okehampton line track wasn’t removed after the closure to passenger services as it was still used until 2010 for the transportation of railway ballast from Meldon Quarry.

However, Okehampton station fell into disrepair and was only occasionally used for excursion trains, including an attempt in the mid 1980s to run weekend trains.

In 1994, British Rail sold the quarry, Okehampton station and the line to the former junction with the Barnstaple line, Coleford Junction, to Camas. Devon County Council and West Devon Borough Council, joined by Dartmoor National Park, decided to restore the then very dilapidated station to fulfil its tourism potential and the County Council bought it from Camas for a nominal sum.

When restoration of the main station building was complete, the County Council leased part of the building to the late Roy Gibbs who started the model shop and buffet and was instrumental to bringing the station back to life. 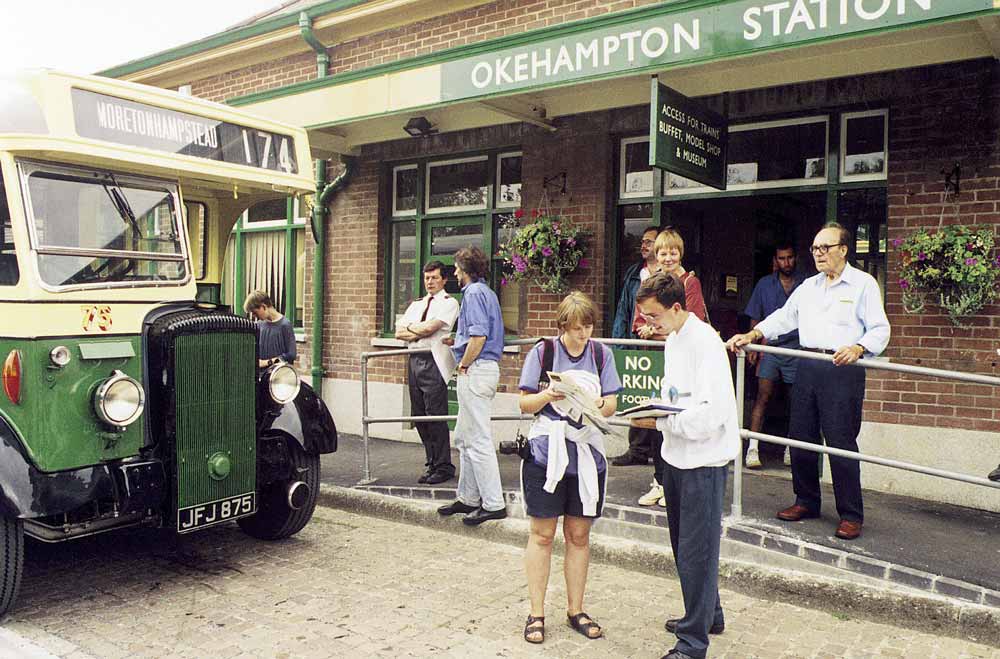 RMS Locotec was engaged by Camas to maintain and operate their part of the line and they founded the Dartmoor Railway in 1997. The Dartmoor Railway took over the buffet and model shop when Roy Gibbs became seriously ill and then passed away.

Following ownership by ECT Group and then British American Rail Services and many years of special trains such as The Polar Express and The Train to Christmas Town, the Dartmoor Railway went into Administration in February 2020 and ceased trading.

Pick up the story in our post: Campaign for reopening 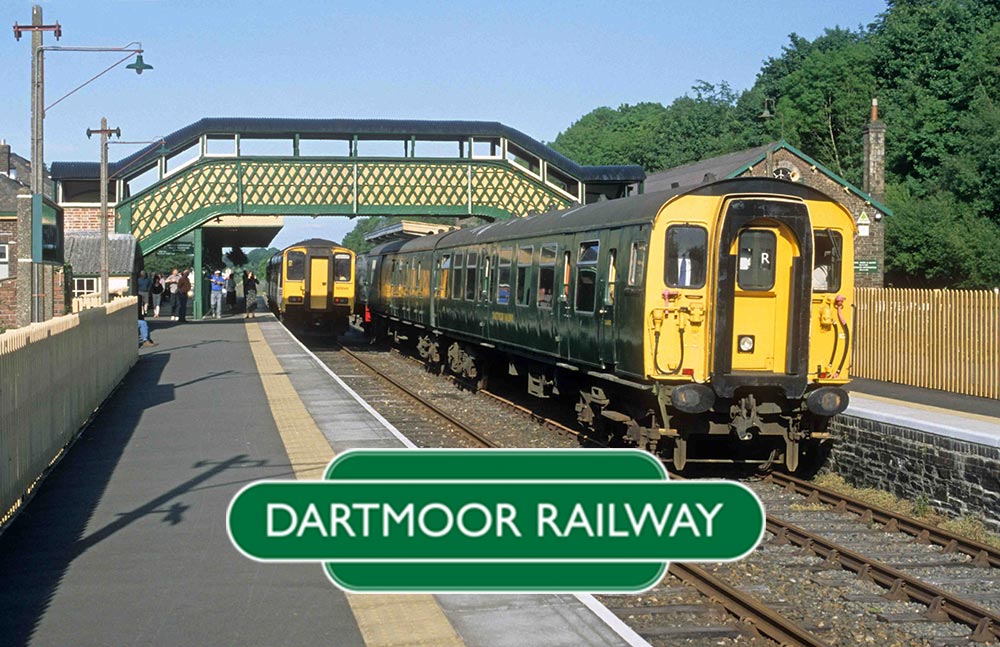 Our thanks to the Dartmoor Railway Association (DRA) for much of the information on this page, reproduced from their informative poster at Okehampton station.

Formerly the Friends of the Dartmoor Railway, the DRA are volunteers who have long worked to look after Okehampton station where they have a museum and shop and to support the line generally. 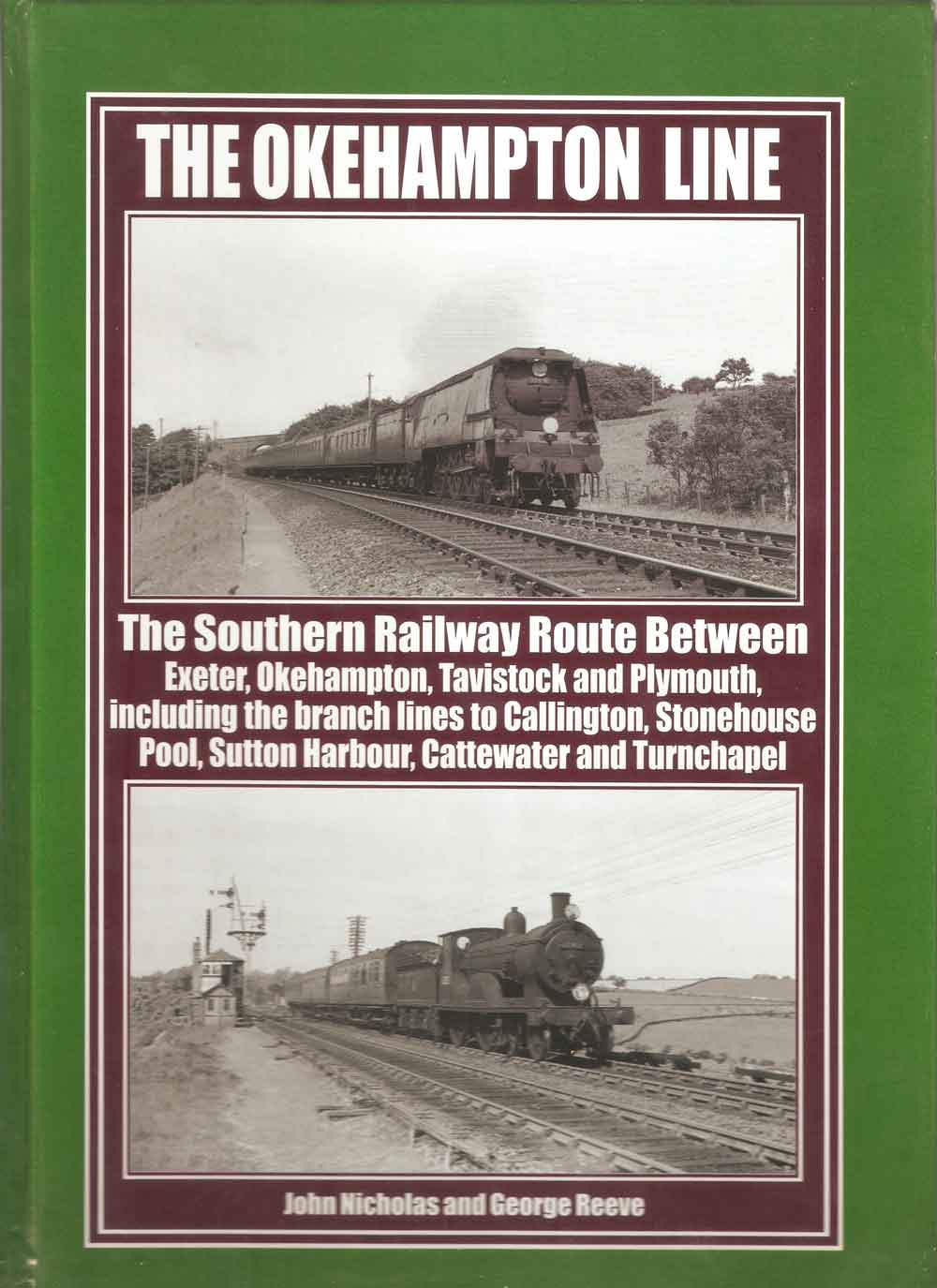 by John Nicholas and George Reeve

First published in 2001 and revised and considerably expanded in 2016, this is a fine and very comprehensive history and record of the line between Exeter, Okehampton and Plymouth. Much detail about the line now being reopened with a huge amount of photographs. Covers the whole former main line through to Plymouth Friary, plus branch lines, so includes much about today’s Tamar Valley Line too. 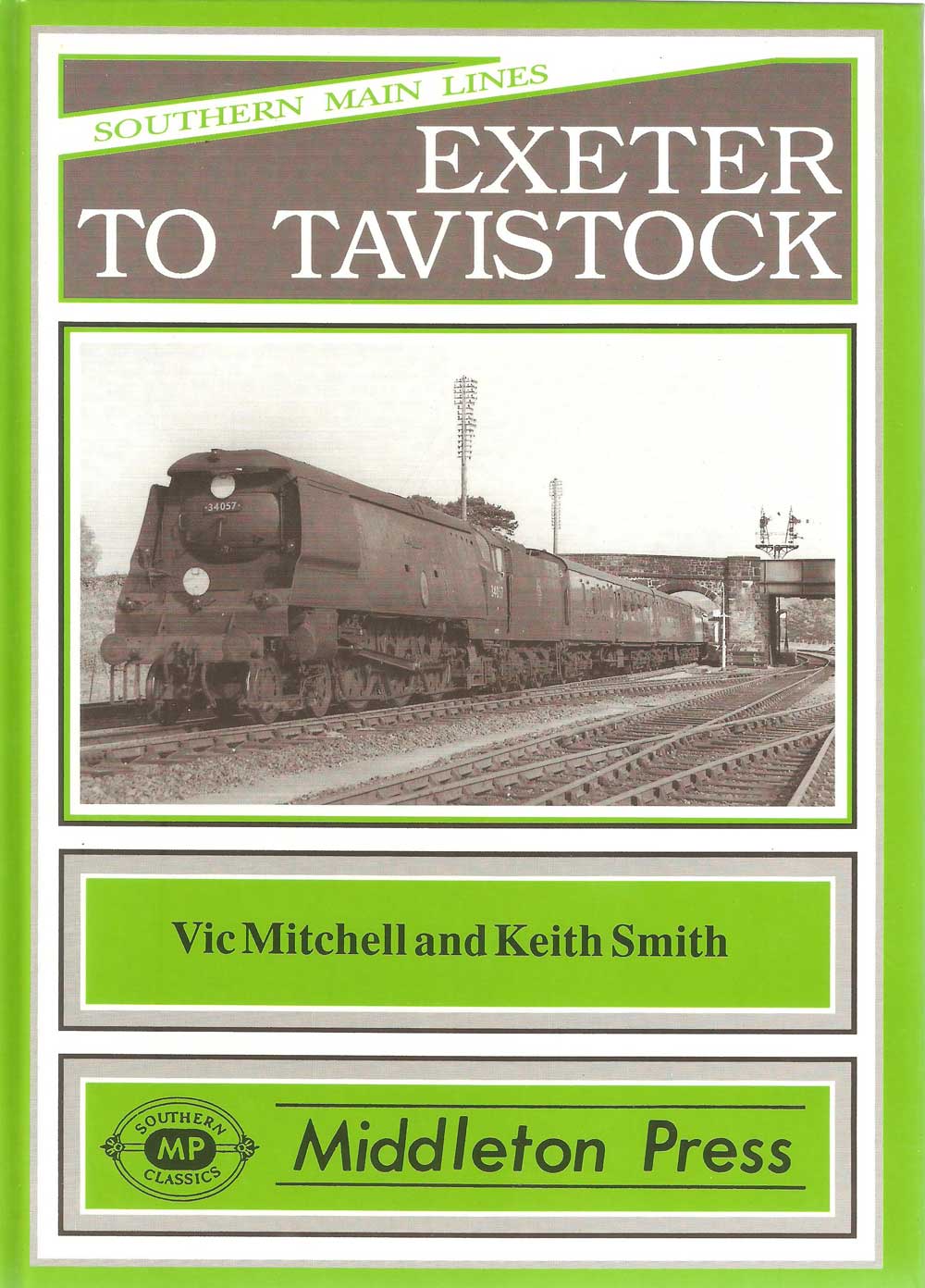 by Vic Mitchell and Keith Smith

Part of Middleton Press’ well known series of line studies, this book is full of photographs charting the history of the route from Exeter to Okehampton and Meldon Quarry up to the mid 1990s, recording too the line beyond Meldon which closed in 1968. First published in 1996, it was last reprinted in 2016. 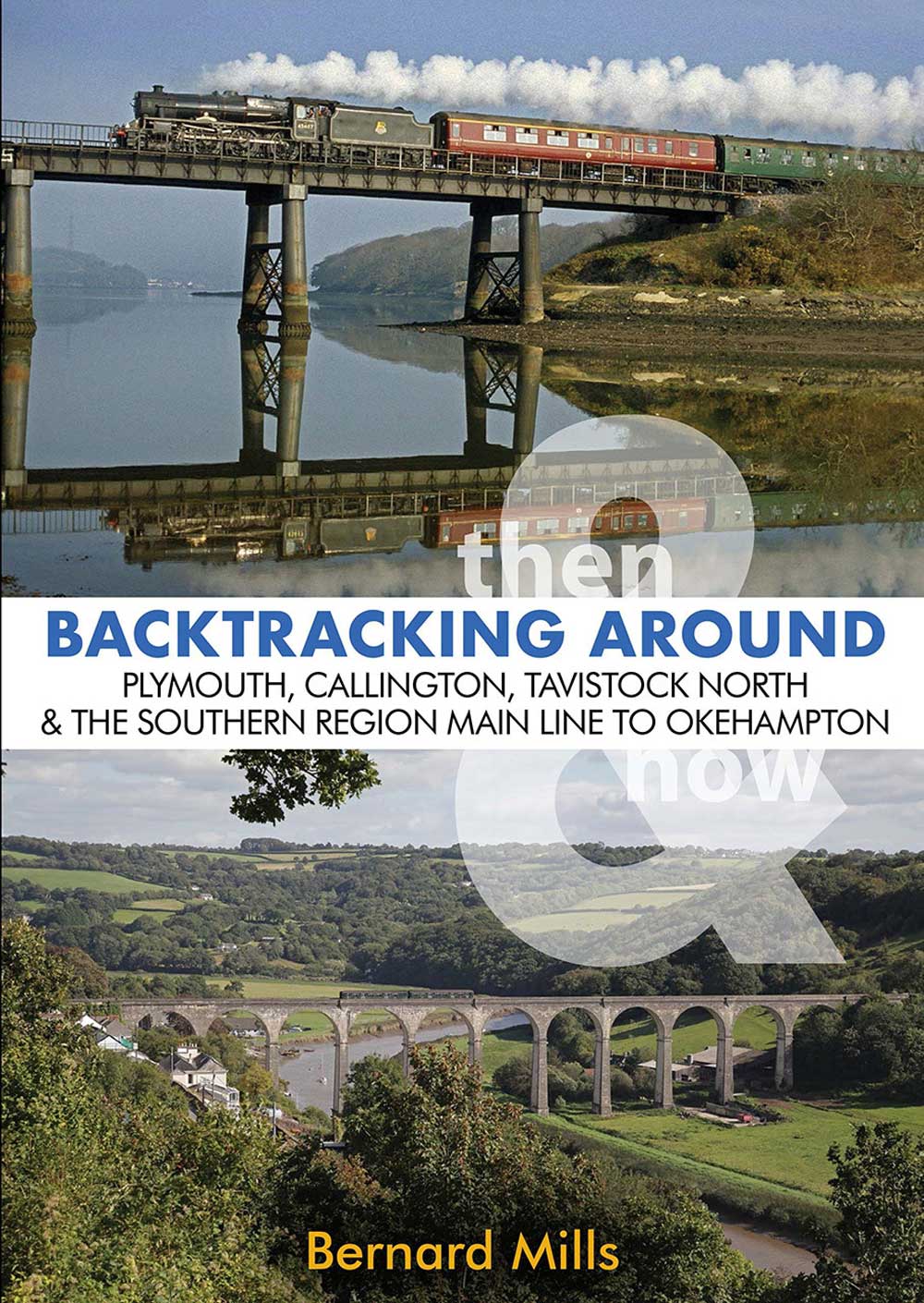 He has been recording the local railway scene for more than fifty years and this book is the most recent of four volumes of Backtracking Around, all covering different parts of Plymouth, West Devon and East Cornwall. Full of colour photos and many where Bernard has gone back more recently to get a “Now” shot to go with the “Then”.

Bernard has also kindly supplied some of the historic photos on this website. 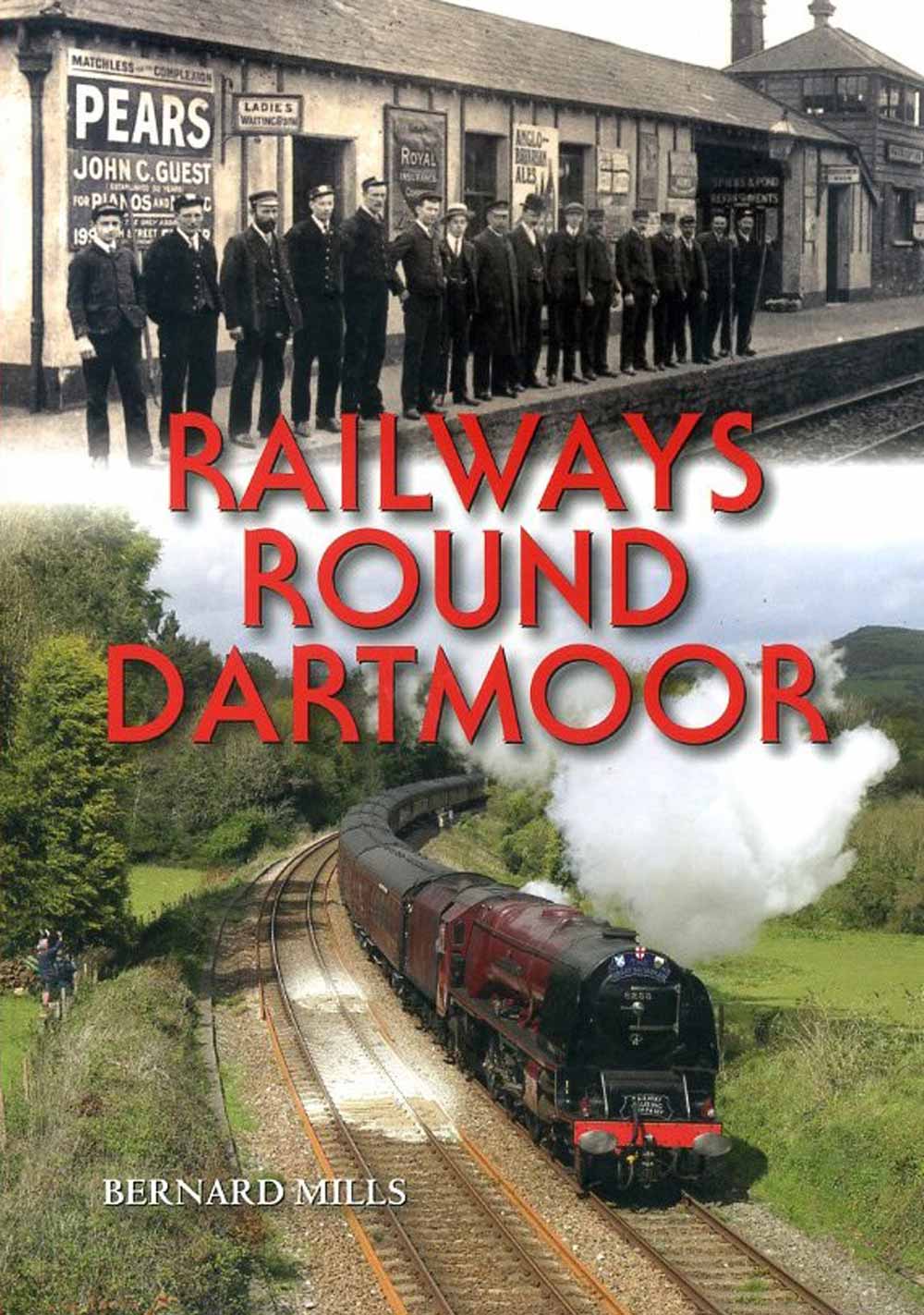 Here, Bernard Mills applies his intimate knowledge of Dartmoor to provide the reader with a detailed history of its railways.

Of particular interest are the many photographs from the author's collection taken when the lines were in use, or in the throes of dismantling, comparing them with photographs of the same scene today.

These, combined with historic photographs from the Dartmoor Trust Archive and other sources, create a book that will prove fascinating not only to the railways enthusiast but also to the general reader. 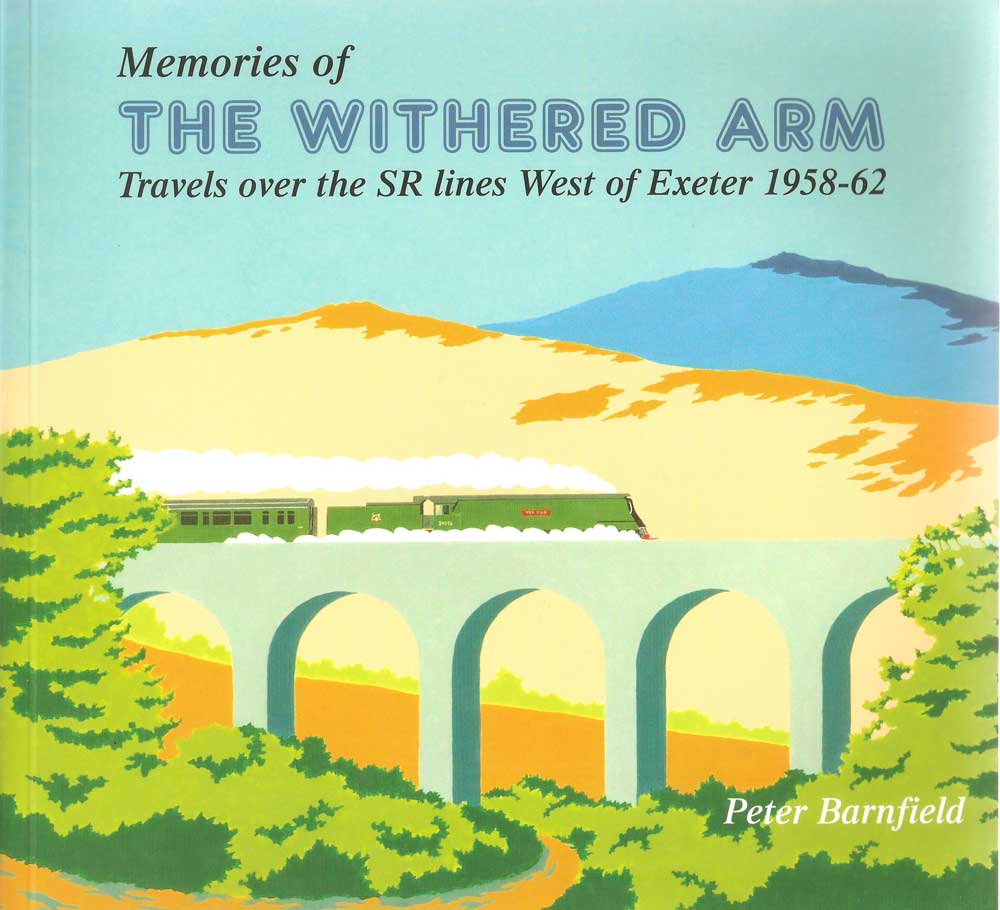 The “Withered Arm” is the nickname for the whole of the former Southern Railway system west of Exeter, in part because of the way the lines looked on the railway map. Peter Barnfield recounts his trips over much of the system as it was in the late 50s and early 60s, when most trains were still steam hauled and just a few years before many of the lines and stations would be closed. All the photographs are his and there are many fine ones.

There are many other books about the "Withered Arm", including detailed books about the lines beyond Okehampton to Bude and Padstow (the North Cornwall Line). The following are two of them and were published many years ago. They are both long out of print but can be quite easily found online or often at secondhand bookshops on heritage railways. 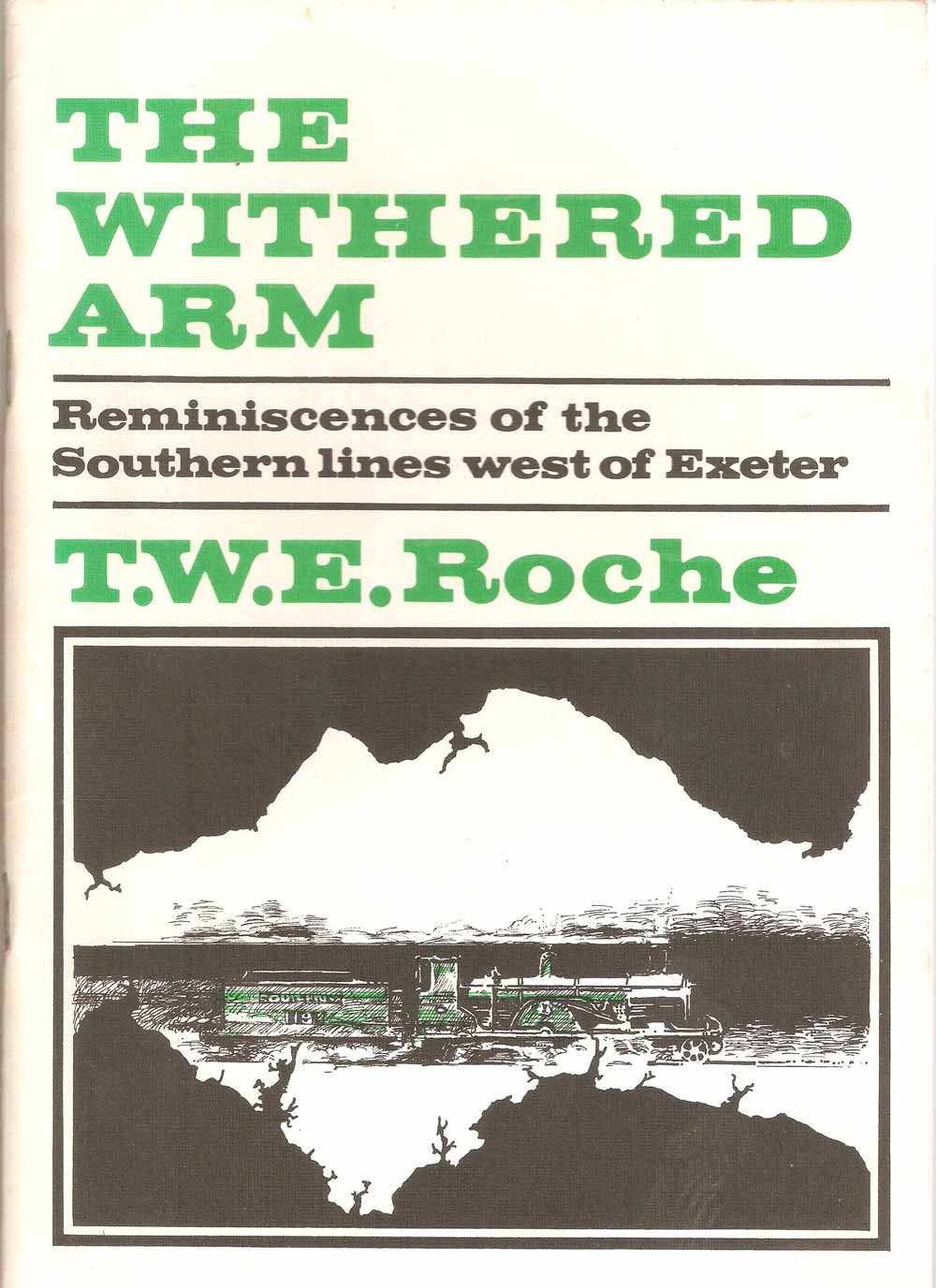 The Withered Arm - Reminiscences of the Southern lines west of Exeter

Published in 1967, when the whole of the route through Okehampton to Tavistock and Plymouth was still just open, this book includes the author’s memories of journeys on the former Southern Railway system west of Exeter, plus some history and his insight on developments. 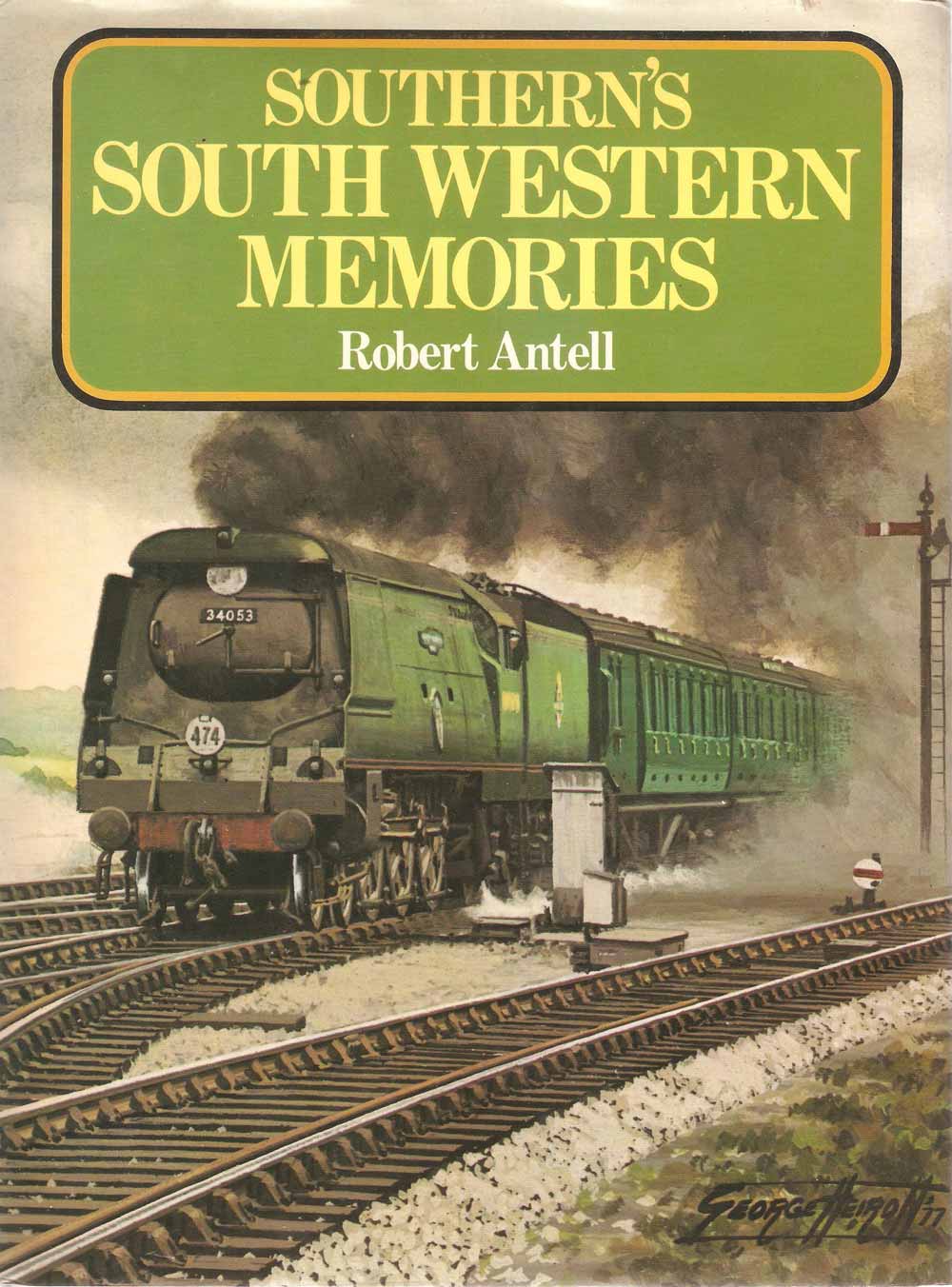 Published in 1977, this book is packed full of black and white photographs covering the main line from Waterloo to Exeter and then beyond on to the different parts of the “Withered Arm”.