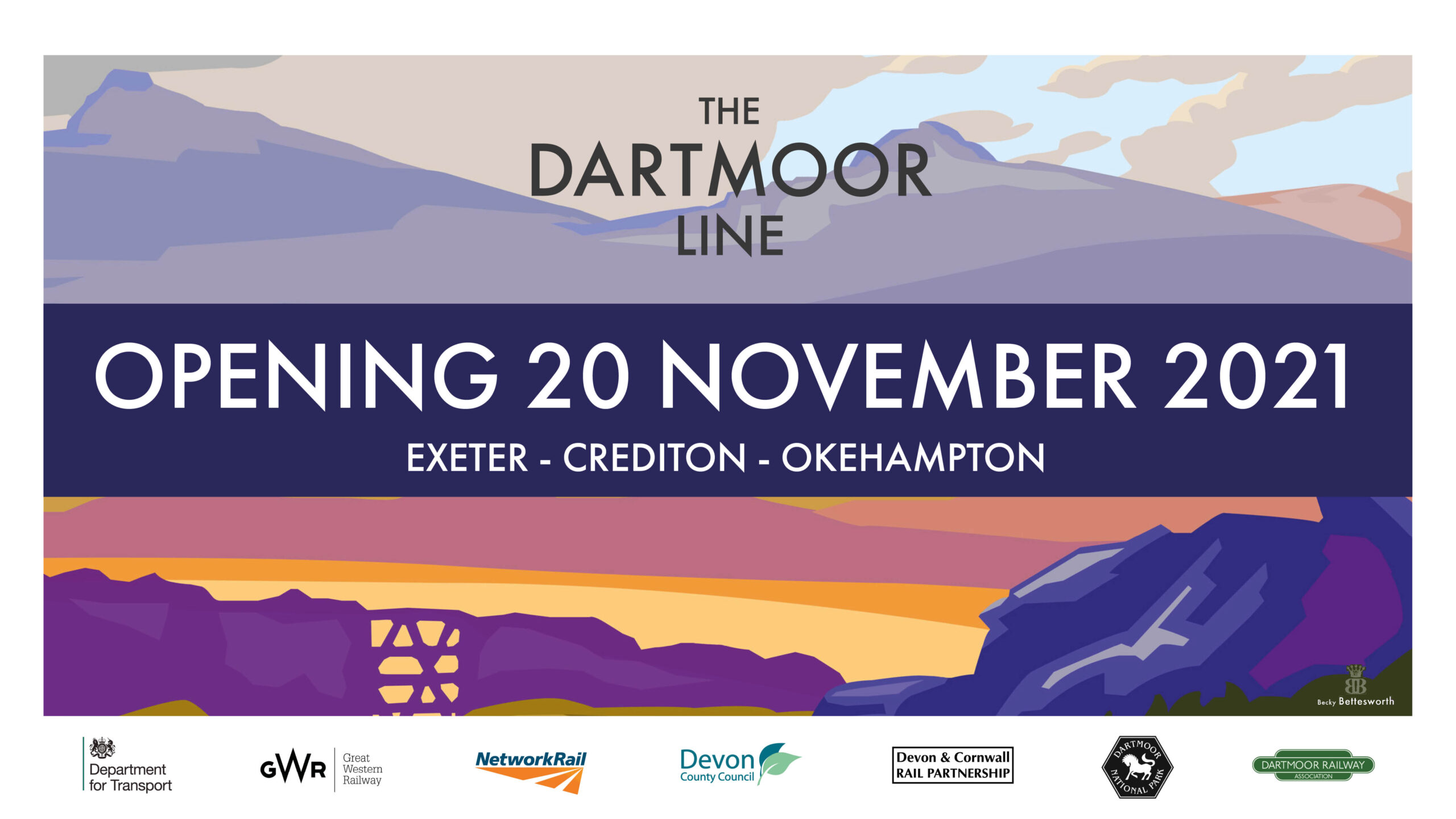 For the first time in nearly 50 years, regular passenger services will run on the Dartmoor Line, connecting Okehampton to Exeter. Services will launch on Saturday 20 November, marking the first reopening under the Government’s Restoring Your Railway programme which is exploring ways to return old lines and stations to service across the country.

The route will connect Exeter St Davids, Crediton and Okehampton providing a launchpad for visitors to explore Dartmoor and regional links for local commuters. Around half of services, including at peak times, will also carry on to Exeter Central. The reopening of the route is expected to boost local businesses, the tourism sector, and provide greater access to education and work for thousands of people who live locally.

The Department and its partners have accelerated the reopening of the railway, delivering passenger services in only 9 months from the original funding being approved to entry into service, and saving money at the same time. As the Government continues its overhaul of the railways following the Williams-Shapps Plan for Rail, more lines and stations will be re-opened.

To make this possible, Network Rail’s team of engineers has worked tirelessly to deliver a huge programme of work to physically reopen the line in just 9 months, including laying 11 miles of new track and installing 24,000 concrete sleepers and 29,000 tonnes of ballast in record time. Repairs have also been made to 21 structures along the route including 4 bridges and a range of works including vegetation clearance, earth and drainage works and fencing are ongoing in preparation for the return of regular services.

More work will be carried out over the winter including further work on the station buildings to enable the restoration of the café and other facilities.

Transport Secretary Grant Shapps said: “The project, funded by over £40million from the Department for Transport, is part of the wider campaign to reverse catastrophic cuts to the rail network primarily led by the Beeching axe.

“The work has been a successful collaboration between the DfT, Network Rail, GWR, Devon County Council, Devon and Cornwall Rail Partnership, and local campaigners and MPs.”

“Our team has worked incredibly hard alongside our project partners GWR, Devon County Council, Devon and Cornwall Rail Partnership and the local community to ensure this railway is ready to open.

“We can’t wait to welcome passengers back to the Dartmoor Line after an absence of nearly 50 years, linking passengers to Exeter and services to the rest of the country.”

Mark Hopwood, GWR Managing Director, said: “This has been a key aspiration for the community and the rail industry for some time and today is a significant day for everyone who has been involved.

“Their support and advocacy over the years has helped deliver a fantastic new service for customers, which we hope will grow from strength to strength.”

Richard Burningham, Manager of the Devon & Cornwall Rail Partnership, said: ”What a day Saturday 20 November will be – the day Okehampton fully re-joins the national rail network.  All of a sudden, a large area of west Devon and north and east Cornwall will be 30 miles nearer the railway than it is today.   It’s going to make a big, very positive difference to many people’s lives.”

Mel Stride, MP for Central Devon, said: “I am thrilled that after a decade of campaigning, a regular passenger service between Okehampton and Exeter has become a reality. I am very proud that our Central Devon constituency is the first in the UK to have a service, lost to the Beeching Cuts, restored by the Government. It has been a huge amount of hard work by so many people, and a local issue on which I have spent a great deal of time – but it has absolutely been worth it. It will provide thousands of my constituents with a rail service on their doorstep, will be a huge economic boost as we bounce back from the impact of Covid-19 and will reduce carbon emissions by taking cars off the A30. I can’t wait to book my first ticket!”

Councillor Andrea Davis, Devon County Council Cabinet Member for Climate Change, Environment and Transport, said: “The reinstatement of the Dartmoor Line has been a long held ambition of all of the partners involved, and it’s incredible to think that we’re now almost there. Devon County Council has led the charge over many years to have regular services up and running on this line again and its fantastic that the opening day has now been announced and tickets are on sale. Everyone is working extremely hard to ensure the line opens on schedule and they should be congratulated for their efforts.”

Regular passenger services will run on the route for the first time since 1972 following years of campaigning by local supporters. Since 1997, the line has only been open during the summer.