Okehampton celebrates 150 years of the railway as reopening draws nearer 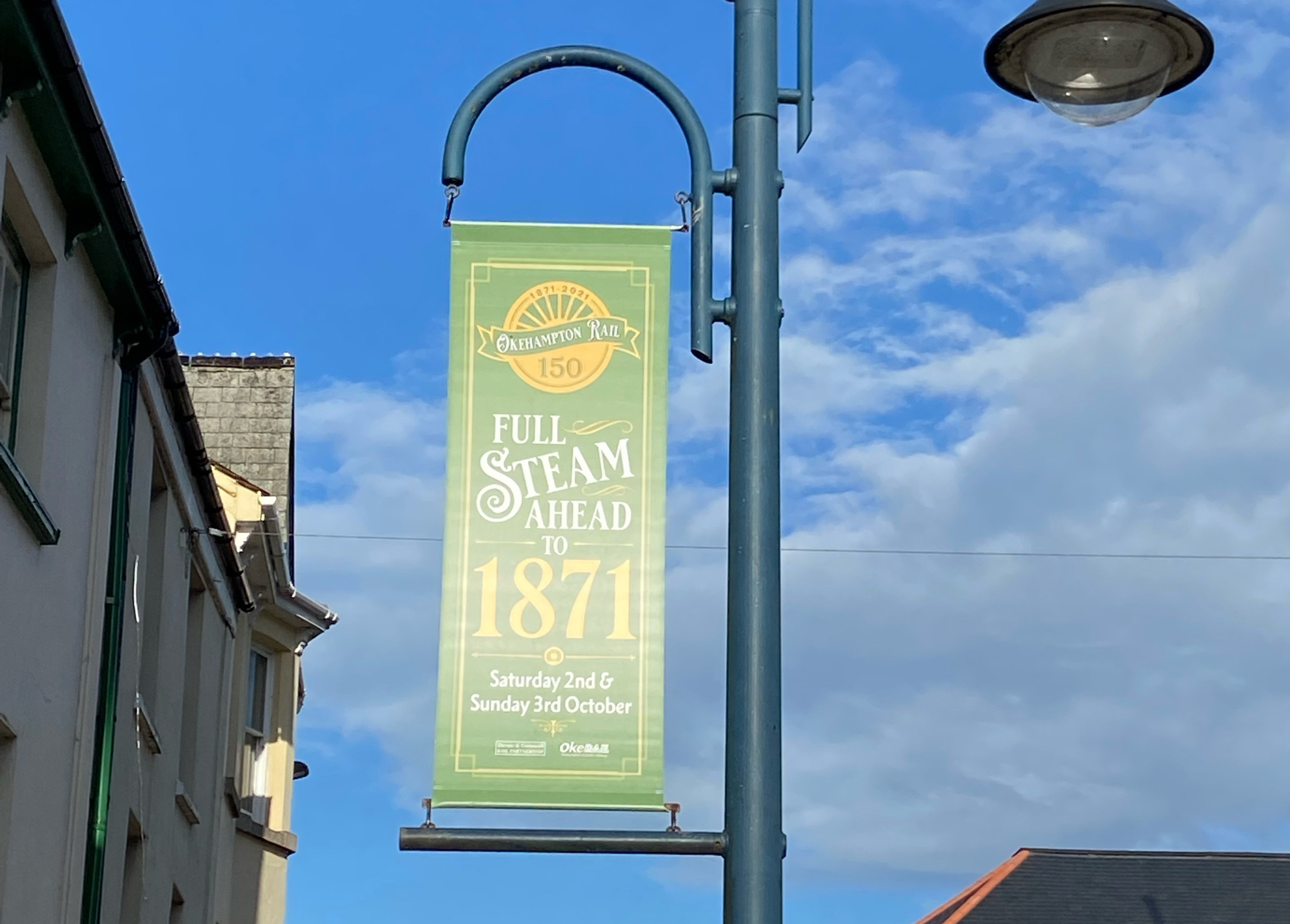 Banners are going up to celebrate the 150th anniversary

Celebrations are in store this weekend (2-3 October) to mark the 150th anniversary of the first public passenger train arriving at Okehampton station.

With work to reopen the Dartmoor Line progressing well, the town will be decorated with ribbons, bunting, Union flags and flower baskets. There will be a “Triumphal Arch” in the form of a double-sided horizontal banner across Fore Street, echoing the arches that welcomed the coming of the railway in Okehampton and many other Westcountry towns.

The Dartmoor Line is scheduled to reopen later this year, heralding the long-awaited return of regular year-round trains from Okehampton to Crediton and Exeter.

On Saturday 2nd there will be a Victorian Tea Party in the Charter Hall during which there will be a short humorous play of the House of Commons debate making the case for, and against, a railway to Okehampton. This will be followed by a video of schoolchildren reading specially written poetry. Victorian attire is strongly encouraged. Refreshments will be served by Ladies of the Inner Wheel. The Tea Party will begin at 9 30AM with the play around 11AM.

On Sunday, the actual anniversary itself, there will be a broad recreation of the events of 1871. At 1 45PM, the Okehampton Excelsior Band will kick off proceedings outside the Town Hall in Fore St by playing a medley of music leading up to a proclamation about the coming of the railway and the benefits it will bring to the town and district.

Things will then move to the station where, on the Youth Hostel side, the Band will play again while dignitaries inspect the station before moving to the Youth Hostel (the former railway Goods’ Shed) for a ceremony where the Mayor will present the “Victorian Stationmaster” with the special token/key, symbolising the opening of the railway to Exeter.

The Stationmaster, Mr William Hodge, will be played by Clive Charlton of Bere Ferrers.

A small committee of local people, chaired by Cllr Dr Michael Ireland, has been working on the celebrations for the last few months. The whole programme has been masterminded by Paul Vachon.

Mr Vachon said: “We are getting a huge response and offers of help and participation for this event. It has certainly sparked the imagination of the community. So many groups, organisations and businesses have offered their support. For the two days of the event we are going to take the town back to 1871 – a very different time but which had issues and needs we would recognise today. The railway coming to Okehampton was a huge economic boost for the town, transforming it from an isolated rural community to a busy market hub – to use a modern phrase.”

The Devon & Cornwall Rail Partnership have been helping the planning. Manager Richard Burningham, a veteran of several similar celebrations elsewhere in the two counties, has been assisting the committee and has organised the necessary funding. Development Officer Rebecca Catterall has focussed on schools’ liaison.

Mr Burningham said: “I’d like to pay thanks to all those who’ve gone above and beyond to deliver these historic celebrations – from the fantastic local community to The Moorlander, which has produced a brilliantly researched Victorian newspaper in its current issue reporting on the arrival of the railway in 1871, and has generously donated copies to be handed out on the weekend.”

Melissa Trudgill, Community Engagement Manager for Dartmoor Multi Academy Trust has coordinated the involvement of its pupils from Okehampton College and the town’s two primary schools, Okehampton Primary and St James CE Primary School plus the Okehampton Guides and Brownies. They have been heavily involved with helping the celebrations, writing and performing poetry, doing artwork for shop windows, making bunting, drawing or painting pictures, putting together period newspaper articles and even creating a clay installation piece and a large historic timeline.

Friday 17th September was “Railway Day” at both primary schools and every child worked on something for the celebrations that day.

Dan Morrow, CEO and Trust Leader from Dartmoor Multi Academy Trust said: “We are incredibly proud of our children and the work they have done to contribute to this historic celebration. Pupils from St James CE Primary, Okehampton Primary School, Okehampton College and the Okehampton Guides and Brownies have all worked really hard to produce poetry, bunting, posters and a colourful timeline and have learnt so much about the Town they live in and the railway. This is truly a whole community event and we have thoroughly enjoyed building these partnerships which will continue.”

The Museum of Dartmoor Life, in Okehampton, will also be involved with the celebrations. The museum has collaborated with local people, community groups and businesses to create an exhibition called ‘When the Train Came to Town’. It Includes photographs from the last 150 years, collection pieces from the Museum, the Station Museum and private individuals, and also the voices of the last station master and the last steam engine driver. To mark this special weekend the Museum will be free to enter on Saturday and Sunday from 10am to 4pm. Please come and enjoy the whole museum as well as the exhibition. On Saturday from 2-3pm Wren music will be performing music of the era inside the museum.

Meanwhile on the line itself, work is moving ahead at fast pace towards the full reopening of the Dartmoor Line and the reintroduction of regular year-round trains after a 49 year gap. The first public passenger trains are scheduled to run by the end of the year as part of the Government’s “Restoring Your Railway” programme.

“With the reopening of the Dartmoor Line getting ever closer, we are excited to be bringing trains back to Okehampton just over 150 years after the first one arrived. Events like this really demonstrate why reopening the railway is so important to the local community and we’re working hard to ensure this happens as soon as possible.”

Christian Irwin, Network Rail’s industry programme director, said: “We are delighted to be supporting these 150th anniversary celebrations as we enter a really exciting phase in our work to reopen the Dartmoor Line to regular passenger services for the first time in nearly 50 years.

“It is evident how much the return of the railway means to the town of Okehampton and nearby communities, and our teams are continuing to work incredibly hard to make this a reality.

“It’s amazing to think that it was 150 years ago the first public passenger train arrived at Okehampton and that by the end of this year, we will be celebrating the return of train services and reconnecting this town with the national rail network.”

Details of the 150th anniversary celebrations are available at www.dartmoorline.com, the official project website for the reopening.