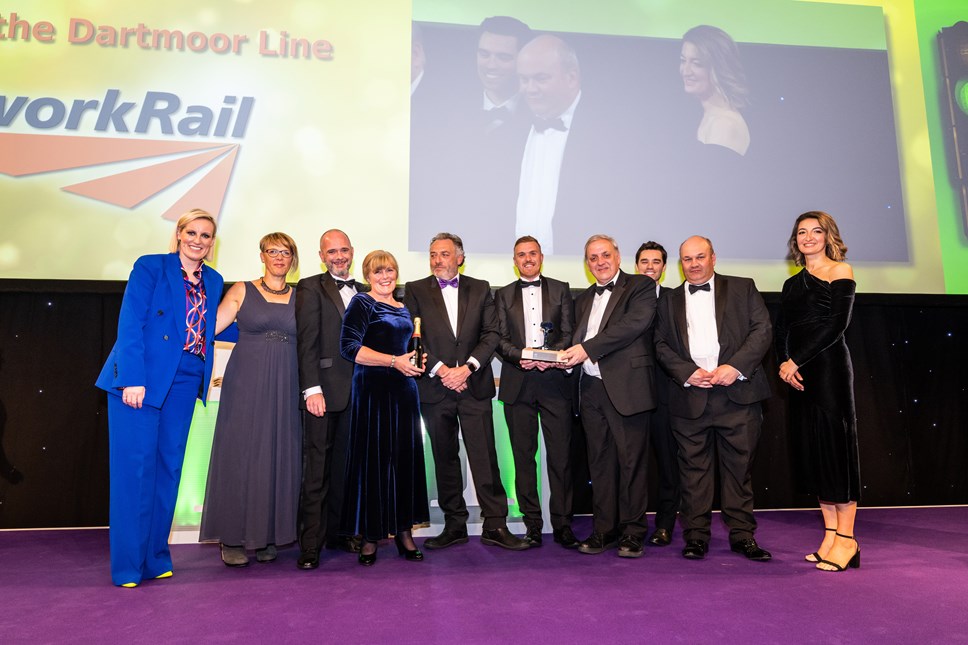 The hugely successful reopening of the Dartmoor Line was recognised with a pair of wins at last night’s ‘Railway Oscars’.

The Dartmoor Line picked up gongs for Outstanding Teamwork and Outstanding Contribution to Society at the prestigious National Rail Awards 2022.

Colleagues from GWR and Network Rail, who were instrumental in last year’s reopening of the line between Exeter and Okehampton, received the awards at London’s Grosvenor House Hotel.

The awards follow victories for the Dartmoor Line at two other national awards ceremonies in the past year, the Railway Innovation Awards and the Community Rail Awards.

The Dartmoor Line reopened last November, restoring a regular, year-round service for the first time in almost 50 years as part of the Government’s £500 million manifesto commitment to Restore Your Railways.

Passenger numbers have exceeded expectations, with more than 120,000 journeys since opening at Okehampton – more than double forecast – and a further 40,000 additional journeys at Crediton.

“We’re thrilled that the reopening of the Dartmoor Line has been recognised with not just one but two ‘Railway Oscars’. These awards are testament to the hard work of so many who campaigned for the line’s reinstatement and those who worked day and night to deliver the project £10m under budget.

“Hourly services commenced in May and the continued demand shows just how important good rail connections are for the community they serve.”

“Devon County Council has led the charge over many years to have regular services up and running on this line again and it’s fantastic to see it has been so well supported by regular customers and holidaymakers.

“I was honoured to attend last night’s awards. The outstanding teamwork by everyone involved in the project has been recognised by judges, which is a resounding endorsement of the close partnership we have in Devon with the rail industry and our communities.”

“It is fantastic to see the outstanding teamwork from across all the partners who made the Dartmoor Line happen recognised, not only for what they were able to achieve in delivering the project in record timescales under budget, but also for the impact the railway is already having on the lives of our local communities.

“This project was far more than upgrading rail infrastructure, this was about reconnecting communities and providing new opportunities. We are delighted and very proud to receive both of these fantastic awards.”